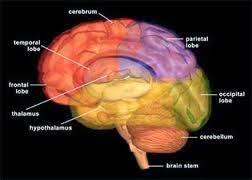 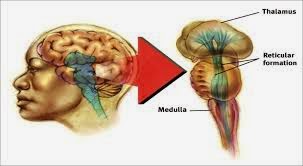 The thalamus is perched on top of the brainstem, near the centre of the brain, with nerve fibres projecting out to the cerebral cortex in all directions. Directionally, it is situated at the top of the brainstem, between the cerebral cortex and midbrain. It is superior to the hypothalamus. It is a centrally-located brain structure that controls the flow of all information to the cortex. The thalamus is a paired structure joined at the midline and sitting very near the centre of the brain. In the human, each half is roughly the size and shape of a walnut. There are two major components. First is the dorsal thalamus, second is the ventral thalamus. Both parts of this structure of the brain in the human are each about the size and shape of a walnut. These are about three centimetres in length, at the widest part 2.5 centimetres across and about 2 cm in height. The two halves of the thalamus are major bulb-shaped masses located on a slope (about 30°) and symmetrically on each side of the third ventricle. 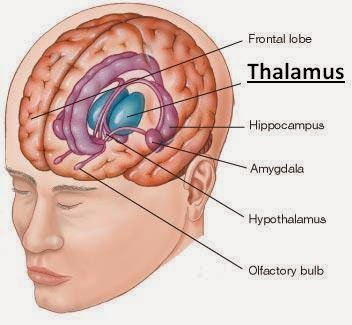 Its function includes relaying sensory and motor signals to the cerebral cortex, along with the regulation of consciousness, sleep and alertness. It is involved in sensory perception and regulation of motor functions. The major role of thalamus is to modulate the flow of information to cortex.  It Represents the final bottleneck of information flow before it gets into cortex. In other words, to modify information flow for process of attention and other behavioural requirements. It is more efficient to do this at the level of thalamus before it gets to cortex.
The thalamus is involved in several functions of the body including: Motor Control, Receives Auditory, Somato sensory and Visual Sensory Signals, Relays Sensory Signals to the Cerebral Cortex, Controls Sleep and Awake States. It may be thought of as a kind of switchboard of information. It is generally believed to act as a relay between a variety of sub cortical areas and the cerebral cortex. Thalamic nuclei have strong reciprocal connections with the cerebral cortex that are believed to be involved with consciousness. The role of thalamus is not limited to getting information to cortex in the first place, which is the role of first order relays, but also continues to function in the higher order pathways, thereby providing an essential, ongoing function for cortical processing. 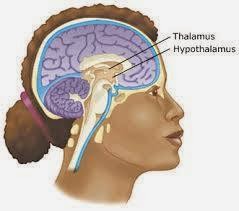 The thalamus plays a major role in regulating arousal, the level of awareness and activity. Damage to the thalamus can lead to permanent coma. The thalamus is involved in mediating the interaction of attention and arousal in humans. The relationship between arousal and attention is closely related to the functions of consciousness. Consciousness is affected by circadian changes of arousal and by the selective influence of attention, which restricts awareness to specific stimuli. The thalamus has to “work harder” in conditions of low arousal to get a performance that is equal to that gained during normal arousal.
Thalamus is that part of body which has a full record of all events of life whether happened or yet to take place. It even records life before birth as well as life after death. It awakens when we are fast asleep. It is the power behind all magics and true dreams. It is responsible for all extra-ordinary, super-natural and spiritual happenings. We willfully try to awaken it with the help of meditation in order to taste the bliss of spiritual world. 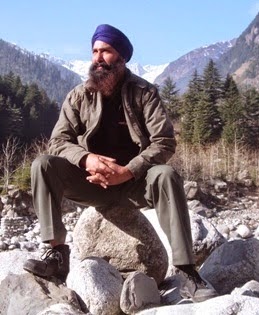